With three laptops on my back, we arrived at the destination: A.M. Qattan Foundation, on Tuesday the 3rd of December, where the next couple of hours we held one of the most exciting events conducted by the Dalia Association: The Social Change Auction. It is a live crowdfunding event, aimed at supporting local community solutions. As soon as we arrived, the team at Al Qattan was very helpful and supportive. We got busy setting up, testing powerpoint presentations, playing music and preparing the space. One of the two initiatives arrived: The telescope-making team from Nova: a voluntary youth association whose mission is to spread astronomical knowledge throughout Palestine among schools, universities, and society. Rinad from the group started practicing her pitch, while I called Jaber and Fida’ from Gaza over the phone. (Yes, there are no borders to durable community development). Their initiative: The Camp’s Cinema initiative is to screen movies within the Palestinian refugee camps in the central governorate of the Gaza Strip. The initiative will include cartoon films that contribute to increasing targeted children's knowledge of various topics and values such as human rights and promote the concepts of Al Ouneh (indigenous Palestinian aid system) and community participation.

Jaber and Fida’ told me that they don’t have electricity at the moment (in the Gaza Strip electricity is available for at least 4 hours every day), but they were prepared with a small battery that can last them two hours, and connection via 3G (Palestine recently acquired the right to use the 3G wave, after many years of negotiations). With the time left for the battery in mind, I informed them that I will text them when their turn came to give their pitch via Skype.

People started arriving at 5:30 pm, they were wearing beautiful smiles because they knew that today, they were going to collectively make a difference. They ate from the delicious pastries by the Barbara’s Women Association: Aboud Kitchen, which they supported in last year’s auction. The Women Association’s initiative was to establish the afore-mentioned kitchen, to generate income for their activities in the village. They all attested to how their participation in last year’s auction provided them with exposure, and needed equipment to arrive at the point they are at today. They also came today to give back to the community and donate to both initiatives. At 6:00 pm, The volunteer Masters of Ceremony(MCs), Manal Alami and Ahmad Shami , along with the volunteers from KTAB initiative (an initiative that sprang from the IBDA’ in the Schools program and their objective is to collect books of all genres for different organizations for kids ages 3-18), and the supportive Team Dalia, ushered the guests in. With a warm welcoming speech from the new Executive Director: Majd Hammori, the Social Change Auction began. It started with the volunteer Stand-Up comedian Jawad Shalabi who made everyone laugh at his personal experiences living with physical disability. Afterwards, Rinad commenced with her pitch: The group will manufacture several telescopes locally, to disseminate astronomical knowledge in Palestine, especially with school students. They mentioned how one of the reasons they came up with this solution is that the Israeli Occupation withholds the telescopes they order for “security reasons”, and that they contacted experts in the field to show them how to manufacture them locally at low cost ($200 USD). I was observing people’s reactions, while simultaneously, texting Fida’ and Jaber to prepare for the connection, I noticed that the guests were impressed with the idea, especially the children who were mesmerized with the starry powerpoint slides. We connected with Gaza, and as they were fixing their screen, the audience could see the glowing battery in the background with only the space of the living room brightly lit. Then they fixed the screen on themselves and started their pitch. They explained how they had previously executed a mobile cinema one evening in their neighborhood, one year after the 2014 Gaza-Attack. They expected 10-15 children to attend, but over 150 children came. They were happy and felt safe. This motivated Fida’ and Jaber to continue with this idea for the future, to alleviate the trauma that children in Gaza experience. This was the most exciting part! We started with the collection for the Camp’s Cinema. The volunteers were busy collecting donations and reaching out to flying hands with different colors of papers. When there was silence, the MCs brilliantly encouraged more donations. Then the donations for the telescope-making team also began. Here again, hands were calling out to volunteers to pick up their donations. As the volunteers came back with their “bounty”, one of them told me how satisfied he felt when people dropped the papers and coins in the boxes. 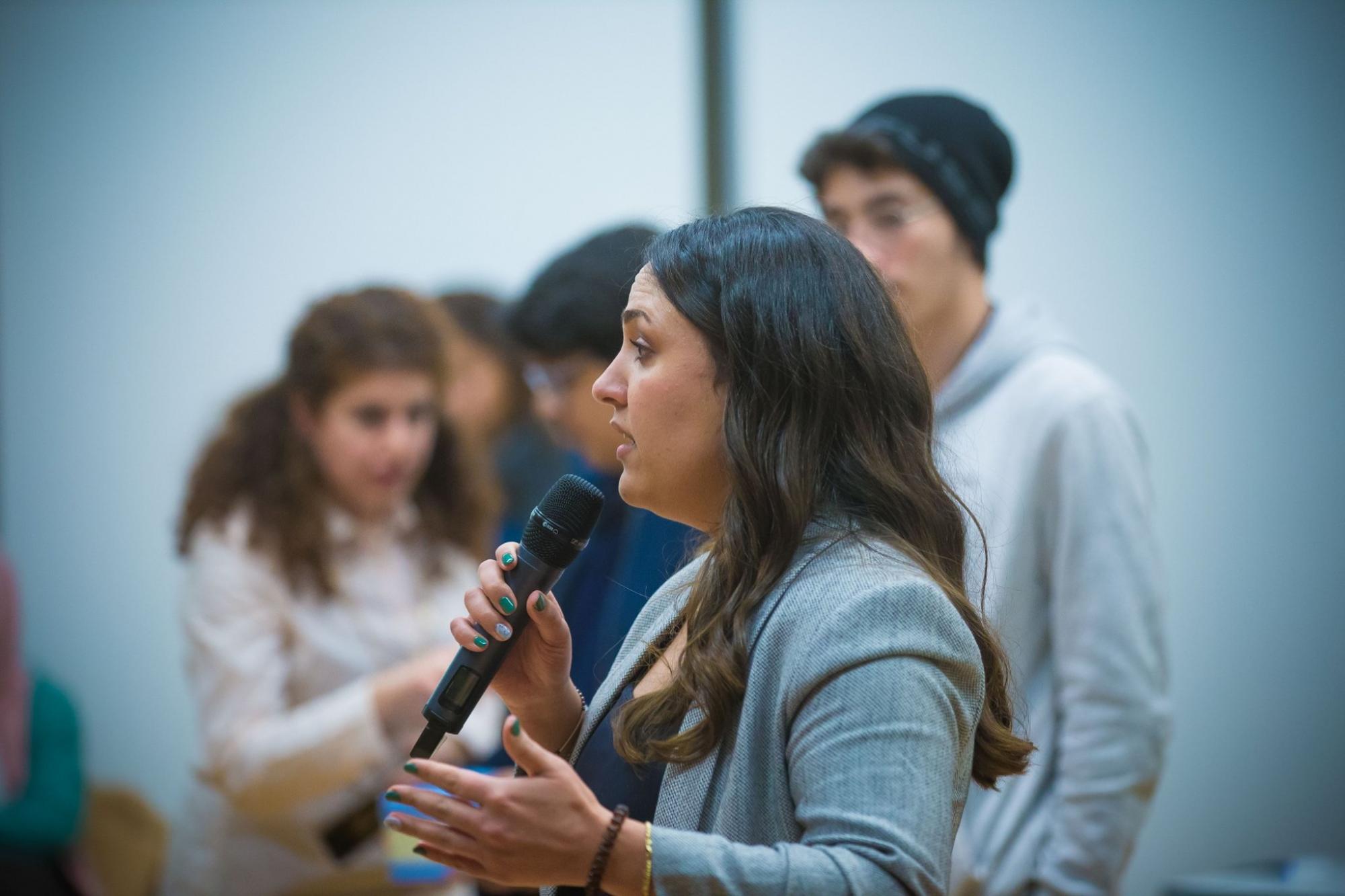 Then the real excitement began. Rania Younis, the Financial Officer at Dalia, or whom I like to call: The Human Calculator, started counting the money. She was theatrical and engaging. At each count of a thousand, people exclaimed in astonishment. The Camp’s Cinema aimed to get 4000 NIS ($1150 USD), but instead, they got 8270 NIS ($2378 USD). As for Nova, they received 5670 NIS ($1630 USD). With more than what was expected, they will now commence with executing their initiatives. 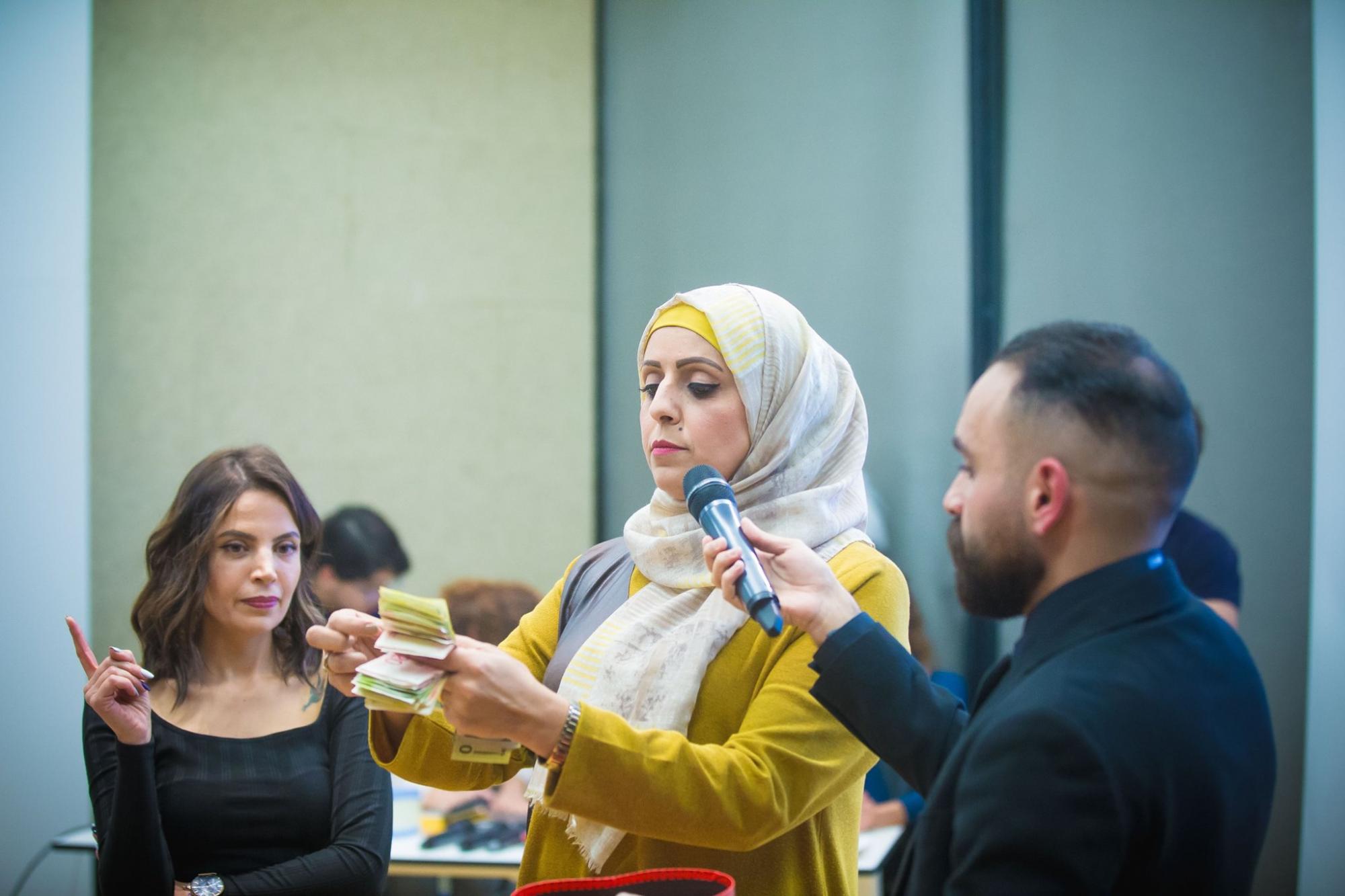 We all thanked the guests for their generous donations. Many of them came to me and told me how proud they felt to support the initiatives with their own money. This was crucial to me, because decades of external aid in Palestine, has reoriented our priorities to suit the global development agenda, without taking into consideration our own needs. People have become used to waiting for a large grant, that doesn’t necessarily target their specific needs, or provide solutions, just to execute projects. With this auction, Dalia was able to remind everyone, that with minimum resources we can still achieve our needs, and above all with the support of each other. This is not a new concept to us, this what we know as Al Ouneh. We take it, revive it, and apply it to the current context we live in.

I worked out my cheeks at this event from all the non-stop smiles of excitement.

Yes, I am proud to say that the Social Change Auction is Funded by Palestinians.